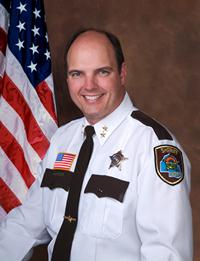 A 25-year veteran of law enforcement, Sheriff Stanek began his career with the Minneapolis Police Department where he rose through the ranks by earning several promotions for his dedication and passion for public safety. While at the Minneapolis Police Department, he worked as Commander of the Criminal Investigations Division, overseeing investigations in the areas of Homicide, Robbery, Assault, Family Violence, Organized Crime, Narcotics, Gangs and Sex Crimes. Concurrent with his law enforcement career, he served five terms in the Minnesota House of Representatives where he chaired the House Crime Policy and Finance Committee. In 2003, he was appointed by the Governor to lead Minnesota’s largest law enforcement agency as Commissioner of Public Safety and Director of Homeland Security.

Currently, Sheriff Stanek serves on the Department of Homeland Security’s Interagency Threat Assessment and Coordination Group (ITACG) which, through a Presidential directive, allows for the sharing of terrorism-related information. He is a member of the national Criminal Intelligence Coordinating Council (CICC), advising the U.S. Attorney General and U.S. Department of Homeland Security. He is also an active member of the National Sheriffs Association (NSA), Major County Sheriffs’ Association (MCSA) and the International Association of Chiefs of Police (IACP). He has lectured extensively on law enforcement issues including: crime policy, managing disaster recovery and intelligence-led policing. He has instructed and lectured for the National Critical Incident Management Conference, National Sheriffs’ Association, Police Executive Research Forum, National Emergency Managers Association, and many civic organizations in Hennepin County.

An active volunteer, Sheriff Stanek invests time with community-focused organizations committed to working with youth. He serves as a board member for the Boys & Girls Clubs of the Twin Cities and East Side Neighborhood Services. At the helm of Sheriff’s Office, he has founded the Hennepin County Sheriff Foundation, which supports several initiatives including programs for at-risk youth.

Sheriff Stanek graduated from the University of Minnesota with a bachelor’s degree in criminal justice and earned a master’s degree in public administration from Hamline University. He has completed executive training at the National Sheriffs’ Institute. Born and raised in northeast Minneapolis, Sheriff Stanek is a lifelong resident of Hennepin County. He lives in Maple Grove with his wife and their 2 children.